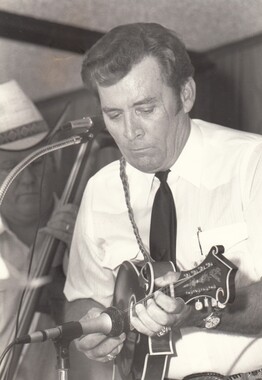 Back to Byron's story

Memorial services for Byron Hugh Reed of Thackerville, Oklahoma, will be held at 2:00 p.m., Saturday, February 15, 2020 at the Flanagan-Watts Funeral Home Chapel in Marietta, Oklahoma with Bro. Murray McMurray officiating. Services have been entrusted to the Flanagan-Watts Funeral Home of Marietta.
Byron was born December 2, 1939 in Tioga, Texas to Chester Byron and Era Lee (Roberts) Reed. He passed away Tuesday, February 11, 2020 at Mercy Health Love County in Marietta at the age of 80.
Byron spent most of his life in Love County migrating here in 1955. He married Lana Langston on October 13, 1969 in Gainesville, Texas. Byron served in the United States Army. He worked for Santa Fe Trailways as a truck driver and was owner/operator of Wolf Hollow Guitars for 40 years. Byron was an accomplished musician, songwriter and singer. He played the guitar and mandolin. He enjoyed restoring music equipment, mainly guitars. When he wasn't listening to, creating, or performing music, he was an avid garage sell shopper. Byron was of the Christian Faith. He had many hobbies and activities that he enjoyed, but perhaps the time he enjoyed most was spent with his family.
Byron was preceded in death by his parents; son, Chad Reed; three sisters, Judith Tabler, Virginia Kretzchmar, and Linda Reed; and two brothers, Randall Reed and Tim Reed.
Survivors include his wife, Lana Reed of the home; son, Johnny Reed and wife Tina of Marietta; five brothers, Gilbert Reed and wife Roxzan of Kingston, Oklahoma, Gary Reed and wife Vicki of Thackerville, Lonnie Reed of Gainesville, Steven Reed and wife Janeth of Thackerville, and Anthony Reed and wife Karen of Thackerville; sister, Sherry Milam and husband Charlie of Thackerville; two grandchildren, Nikki and Taylor Reed; great-grandchild, Jagger Reed; and numerous nieces and nephews.
Honorary bearers are Jim Day, Wendell Donnelly, Gilbert Reed, Gary Reed, Lonnie Reed, Steven Reed, Anthony Reed, and Sherry Milam.
For those who wish to make memorial contributions, the family suggest you please consider making a donation to Trump/Pence 2020, secure.donaldtrump.com/donate or mail to Donald J. Trump President, Inc. C/O Trump Tower 725 5ht Avenue, New York, New York 10022.
On-line condolences: www.wattsfuneralhome.com
Published on February 12, 2020
To send flowers to the family of Byron Hugh Reed, please visit Tribute Store.

Send flowers
in memory of Byron

A place to share condolences and memories.
The guestbook expires on May 12, 2020.