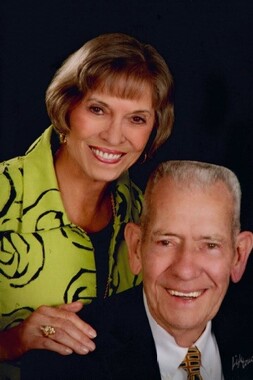 Back to Dee's story

Funeral services for Dee Erwin, 87, of Lake Kiowa, are scheduled for 11:00 AM on Thursday, January 16, 2020 at First Baptist Church of Gainesville with Dr. Jeff Langley officiating. The committal service will begin at 3:00 PM at Allens Point Cemetery in Honey Grove. The family will receive friends at 10:00 AM prior to the funeral.
Dee entered the world with her twin sister, Pat, on October 25, 1932 in Cooper, Texas and was called home by her heavenly Father on January 11, 2020 in Denison. She grew up in Cooper and moved to Honey Grove in 1948. Dee graduated from Honey Grove High School in 1950. After graduation, she moved to the "big city" of Dallas. She married Frank Erwin on February 25, 1955 when they started their life together in Garland, Texas. They were blessed with their first child, Sharon Deidra, in 1959 and Lisa Ann in 1964. Two children have never been more loved! They lived in Garland until the girls were grown and married and had children of their own. They owned Southwest Floor Covering, which later became Frank Erwin Company, for many years, and formed many life-long friendships during that time. After retirement, they moved to Honey Grove to be closer to her dad, after the death of her beloved mother. After the death of her dad in 2006, they stayed in Honey Grove for three more years. In October 2009, they moved to Lake Kiowa where her sisters, Jonnie and Ann, lived. Dee loved living at Lake Kiowa. She loved playing golf and made many wonderful friends. She also loved her church, First Baptist Church of Gainesville, and Sunday School Class so much and was very active there. She loved Frank so much and missed him terribly when he passed away in March 2013. They are now reunited, which gives us great comfort. Dee was so loved by so many and will be missed forever.
Survivors include: daughter Sharon Robinson of Honey Grove; daughter Lisa Holley and husband Dan of Rockwall; grandchildren: Jeremy Robinson (Destiny), Amy Robinson (Deana), Jordan Robinson, Andy Holley, and Josh Holley; great-grandchildren: Emalyn Searles and Brantley Robinson; sister Jonnie Hall of Lake Kiowa; sister Ann LaRue of Lake Kiowa; nephews: Steve Hall and David Hall; and niece Sandy Cordova.
Mrs. Erwin was preceded in death by: husband Frank Erwin; parents Ray and Hazel Wylie; twin sister Pat Green; son-in-law Jeff Robinson; brother-in-law Jerry LaRue; brother-in-law Gaz Green; nephew Rickey LaRue; and niece Laurie Moore.
Memorial contributions may be made to: American Cancer Society.
You may sign the online register at www.geojcarroll.com.
Published on January 13, 2020
To send flowers to the family of Dee Erwin, please visit Tribute Store.

Send flowers
in memory of Dee

A place to share condolences and memories.
The guestbook expires on April 12, 2020.

Secret Garden Basket was purchased for the family of Dee Erwin by Bob & Margy Cords and Bill and Nancy Maxwell.  Send flowers

Jan Thies
I will miss my dear friend Dee. We have been golfing together for years. I always welcomed having her ride with me so we could discuss our families and friendship. Later we played gin together the last time at her house on the Monday before her death. May God bless her soul and let her be with her beloved sister Pat and husband Frank.
View all