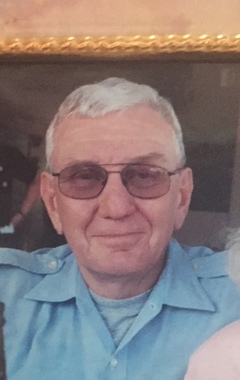 Back to Donald's story

Donald Elsworth Wigren, 85, of Collinsville, Texas was called home to his Lord and Savior on Sunday, January 12, 2020.
Donald was born on August 21, 1934 in Plainfield, Connecticut to Sven and Tynne (Allanen) Wigren. He later married the "love" of his life Eila Fors in Westerly, Rhode Island on May 7, 1955. He retired from the military, having served during Desert Storm and spending countless hours in the National Guard. Donald was extremely proud of his Finnish heritage, building his own authentic sauna, which he loved. Being a jack of all trades, he always found a way to provide for his family. In his younger years he was involved with the boy Scouts having established Troop 21 in Ashaway, Rhode Island, which is still active and going strong 50 years later. He loved to fish, camp and work outdoors and was always willing to lend a helping hand to anyone in need.
He is survived by his loving wife, Eila Wigren, daughter Lynda Rosaschi and husband, Rick, son, John Wigren and wife, Lorna, grandchildren, Jessica Wigren, John Derrick Wigren, Lydia Butler, Logan Rochell, great-grandchildren, Bella, Gabby, Madison, Kruze, Memphis, Khloe and Camden, nieces, Jane Bowman, Gaylee Donandt, and nephew, Marlon Taylor, as well as many other loving family and friends. He will be truly missed but never forgotten - forever in our hearts.
Donald was preceded in death by his parents, and his sister, Pearl Schnieder.
Memorial services for Donald will be held at 2:00 PM on Sunday, February 2, 2020 at Meador Funeral Home of Gainesville. A visitation will be held one hour prior to service time at the funeral home. Cremation arrangements are under the direction of Meador Funeral Home of Gainesville.
To sign the online registry, please go to www.meadorfuneral.com.
Published on January 23, 2020
To plant a tree in memory of Donald Wigren, please visit Tribute Store.

Plant a tree in memory
of Donald

A place to share condolences and memories.
The guestbook expires on April 22, 2020.