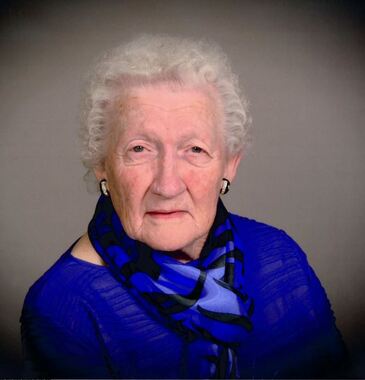 Back to Evelyn's story

Evelyn Block Fuhrmann
A Mass of Christian Burial for Evelyn Fuhrmann, age 90 of Lindsay, will be held on Wednesday, January 15, 2020 at 10:00 AM at St. Peter's Catholic Church with Fr. Matthew Tatyrek officiating. Burial will follow in St. Peter's Cemetery. A Rosary will be recited on Tuesday, January 14 at 6:00 PM at Geo. J. Carroll Funeral Home with a visitation to follow.
Evelyn died Tuesday, January 7, at Medical City Denton. She was born in Lindsay on October 18, 1929 to Pete and Pauline Laux Block. She was raised in Lindsay and attended school there. After graduation she worked for Kress Department Store. Evelyn married Damond Fuhrmann on February 8, 1950. They enjoyed 66 years together before his passing on May 16, 2016. After their marriage they operated a dairy farm north of Lindsay. Evelyn helped her husband on the farm as much as possible while raising 6 children.
Evelyn was a life-long member of St. Peter's Catholic Church. She was a member of St. Ann's Society. She loved playing dominoes with family and friends and in their earlier years enjoyed traveling with good friends Marcus and Cathy Fuhrmann. Evelyn took great pride in a clean house and loved to cook for the family. She was a caring wife, mother, grandmother, and great-grandmother.
Evelyn is survived by daughter Lynn (Maurus) Hacker of Myra, son Jim (Judy) Fuhrmann of Lindsay, daughter Carol (Ben, Jr.) Fleitman of Muenster, daughter Peggy (Leo) Lutkenhaus of Muenster, daughter JoAnn (Rudy) Schumacher of Era, daughter LuElla Fuhrmann of Lindsay, 15 grandchildren, 37 great-grandchildren, sisters Tootsie Kuntz of Valley View, Alice Looney of Dallas, Elfreida Wagner of Perry, Oklahoma, Irene Loerwald of Robson Ranch, and Patty (Bill) Hemmi of Scotland, Texas.
Evelyn was preceded in death by her husband, parents, great-grandchild Julie Becker, and brothers Sonnie and Gene Block.
Evelyn's grandsons will serve as pallbearers. Memorial contributions may be made to St. Peter's Catholic Church.
You may sign the online register at www.geojcarroll.com.
Published on January 9, 2020
To send flowers to the family of Evelyn Block Fuhrmann, please visit Tribute Store.

Send flowers
in memory of Evelyn

A place to share condolences and memories.
The guestbook expires on April 08, 2020.

Kathy grewing
So sorry for the loss of your mother. I know she will be missed greatly. My prayers and thoughts are with you
Jeanie Nickerson

Lynn, Peggy, Carol and Joann, so sorry for the loss of your sweet mother. I will continue to have you in my thoughts and prayers. May she rest in peace.