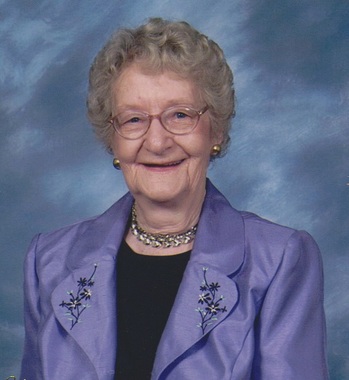 Walburga (Wallie) Margaret Tate Buck of Denton, Texas died on Thursday, April 11, 2019 at The Vintage at the age of 100. She was born to Otto and Lena (Bezner) Schmitt on January 6, 1919 in Lindsey, Texas.
On August 5, 1941, she married Charles Tate. She worked at dress factories until they moved to Snyder and Post where she worked at a department store, and later she worked as an assistant manager at 7-Eleven until she retired in 1982. After Charles' passing on January 5, 1984, Wallie moved back to Gainesville, Texas.
She married Thomas "Paul" Buck on April 1, 2000. He passed away on July 5, 2002.
Wallie was a member of St. Mark's Catholic Church in Denton, Texas and a member of St. Helena's Circle.
The family will receive friends from 2-4 p.m. Sunday, April 14, 2019 at DeBerry Funeral Director in Denton. A funeral mass will be held at 2 p.m. Monday, April 15, 2019 at St. Mark Catholic Church. Interment will follow at the Fairview Cemetery in Gainesville, Texas.
Wallie is survived by her son and wife, Charles and Nell Tate of Ranger, daughter, Becky Ticer of Haskell, stepdaughter and husband, Paula and Kenny McCain of Denton, stepson, Thomas Paul Buck Jr. of Littlefield, three grandchildren, Thomas Tate, Stephanie Moss, Jerica Ticer and husband Neema Naserzadeh of Houston, two step -grandchildren, Christopher McCain and wife, Keri of McKinney and Mark McCain and wife Venezia of Denton, two step great-grandsons, Jesse McCain and Colton McCain.
She was preceded in death by her parents, both husbands, an infant in 1945 and all her brothers and sisters.
Published on April 12, 2019
To plant a tree in memory of Walburga Margaret Tate Buck, please visit Tribute Store.

Plant a tree in memory
of Walburga

A place to share condolences and memories.
The guestbook expires on July 11, 2019.

Restore this Guestbook to share a memory or message of condolence of your own.